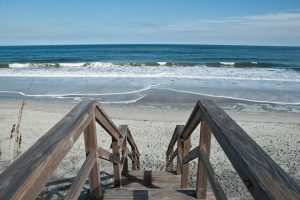 Were to go surf fishing

The most important part of surf fishing is not the tackle or bait but LOCATION.  Not Florida versus North Carolina but where you are standing vs 100 yards down the beach.   Great bait where there are no fish is a waste of your time.  You might as well cook the bait for dinner.  Whiting and Pompano feed mostly on sandfleas, ghost shrimp, shrimp, and clams.  None of these animals are powerful swimmers.  In fact, most of them live in the sand.  So how do whiting or pompano make a living on the beach?  They look for places where the waves and current uncovers what they eat. They move with the current until they find a spot that has bait drifting through.  All beach fish patrol certain areas where the current uncovers or pushes bait.  This includes Redfish, black drum, trout, tarpon, and sharks.  These larger species will eat the same things as whiting and pompano plus mullet, crab, and cut bait.  Since you are not in the water feeling how the current moves and seeing where the bait is drifting you must “read the beach”.  Walk or drive along the beach keeping an eye on the wave action and color.  Waves and color tell you what the bottom is doing and therefore the most likely places for whiting and pompano to be.   Most beaches have only sand bottoms, especially on Amelia Island.   Sand moves in fairly predictable ways on a beach.

As waves move from the open sea to shallower areas the bottom of the wave is slowed by friction from the sand.  Some sand is picked up by the moving water and pushed toward shore.  The top of the wave does not slow down but keeps going at the same speed.   When the top of the wave is no longer supported by the bottom of the wave it collapses.  This is what we see as a breaking wave.  A breaking wave tells us that the water is shallower than the height of the wave.  When the wave breaks the sand that it is carrying is dropped to the bottom.  The dropped sand creates a sandbar.  Some beaches have more that one sand bar.  Amelia Island generally has only one. 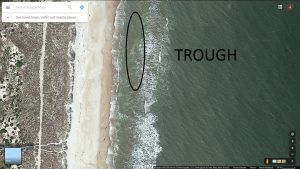 The most basic and easiest surf formation to locate is the trough.  It is the area between the sandbar and the shore.  Generally, the trough is between 100 and 200 feet wide from shore to the 1st sandbar.  The depth of the  trough can be 1 foot to 6 or 7 feet depending on the tide stage.  It is a fish highway up and down the beach but is too large to assume there will be fish where you are.  Study the movement of the current within the trough.  It may till you where a cut is.

Holes are deeper spots within a trough.   Sometimes wave action will create a spot inside of the trough that is somewhat deeper, perhaps only a foot or two.  This will usually appear as darker colored water.  This is almost always a spot where predators hang out waiting for bait.  The bait that the waves churn up will try to swim back to the bottom but sometimes they end up in these deep holes staring at a hunger fish.

Rips and cuts are the same things.  This is the king of the beach structure.  Rips usually hold fish.  Not all sandbars have a rip.  The water that comes over the sandbar will go back out to sea to make room for the next wave.   It can go back over the sandbar but if there is a low spot in the sandbar it will take the low spot as the path of least resistance this is a rip.  Rips start as a low section in the sandbar that becomes deeper with time. Rips will last as little 6 hours between tides or sometimes for days.  Storms almost always move sandbars and dramatically change beaches.  Frequently rips don’t go straight out from the beach but are at an angle to the beach. 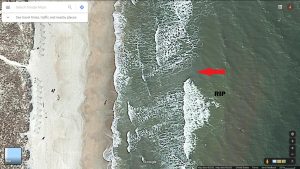 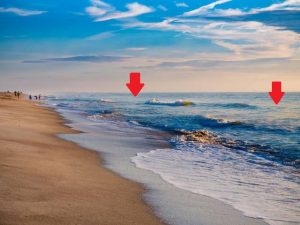 How to spot Trough, Holes, and Rips

The easiest way to find any of these structures on the bottom of the ocean is to go to the beach at low tide then return after the tide has come in for 2 or 3 hours.  It should help to identify what is causing the waves to behave in certain ways.

Troughs are easy to find.  Look for waves breaking some distance from shore.  This is the sandbar.  The area between the breaking wave and shore is the trough.   There will be no breaking waves within the trough.

The color of the water in the trough will be fairly uniform.  If there is a section of the trough that is a darker color, you have found a hole.

Rips are the best places to fish on a beach.  They are not as easy to spot as the other two features but there are telltale signs of their presence.   Generally, waves don’t break over a rip but not always.   Waves are not consistently large.  They are generated by wind and travel hundreds or even thousands of miles.   When waves come from different directions and interact some waves in the set may reach the beach as larger or smaller than the previous wave.  If a larger wave arrives it will reach deeper into the water and may break over a rip but the smaller waves will not.  You must watch between 3 and 7 waves to see an entire sequence of waves.   Another trick is to watch the foam or bubbles on the water.  If they move away from the shore there may be a rip.  Remember rips frequently move diagonally to the beach.

So you’ve found a promising spot now what.

If you only have one rod you will have to experiment a little.  Pompano like breaking waves because it stirs up the bottom uncovering clams, ghost shrimp, and sand fleas.  If you can cast to the sandbar and Pompano are in the area you should catch some.  If you can cast over the sandbar the backside is also a good spot.  Whiting usually will be found in a hole or a rip.    Redfish, black drum, trout, Spanish mackerel, flounder and small sharks will work the rips or cruse the trough or the backside of the sandbar.   Cast to either side of the rip.  If that doesn’t work cast into the middle of the rip.  The same technique will work for holes.   I fished a 50-foot wide hole for half a day with four rods.  I cast the same rig with the same bait back to the same spot with each rod.  Only 1 rod cast to the edge caught any fish all day with one exception.  The exception was one Spanish mackerel on a lure in the cast to the middle of the hole but hooked about 5 feet from shore.  My conclusion is that you must fish all sections of the structure until you find the fish.

Check out this excellent video from The Sinker Guy.  While your their like and subscribe and don’t forget to look into his website for sputnik sinkers and other accessories.