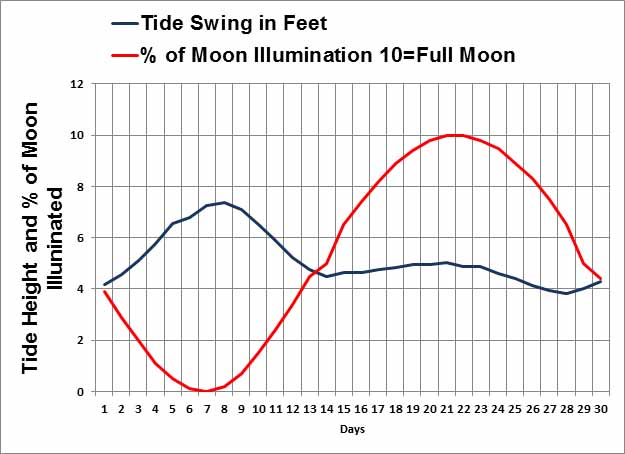 Tides and weather have the greatest impact on fishing.  The sun and the moon cause tides and to a lesser degree wind.  Tides are most impacted by the moon because the moon is much closer to the earth than the sun.   The moon’s illumination is indicated by the red line in the attached chart.  The blue line is the difference between low and high tide in feet.  When the moon is 0% illuminated or black on the 7th day it makes for the largest tides during the lunar cycle.  This is because the moon and the sun are on the same side of the earth during the new moon and working together to influence the tides. A full moon with 100% illumination on the 21st day has less of an impact on tides because the moon is opposite the sun and the sun is negating part of the moon’s effect.  During the new moon phase, tides change by as much as 7 feet while during the full moon tides only change by 4 to 5 feet.  If the wind is blowing from the east high tide will be greater but the low tide will be higher than predicted.  The opposite is true if the wind is from the west.  If you are a kayaker check the tide schedule before you go out to take advantage of the tides.  Tides at downtown Fernandina Beach vary from the St. Johns River by as much as 30 minutes in a distance of fewer than 20 miles.  There are eight tide stations between Fernandina Beach and Mayport (St. Johns River).   A good site to check tide is:  Tides4Fishing  or SaltStrong’s SmartFishingTides

How do tides impact fishing around Amelia Island?  Seatrout, redfish, black drum, and bluefish all take advantage of tidal flow to bring food to them.    Fish are couch potatoes, they are all about conserving energy while eating as much as they can.  This is why many species will hold behind obstacles waiting for bait to wash by in the tidal flow.  These species are all strong enough to hold in current as well.  When the tide is not flowing at low or high tide the fish reduce their activity as bait is not being moved by the current.

The best time to fish is an hour or two before and after a tide change.  That is because the water flows at its fastest about two hours before and after the tide change.   This is call the tide coefficient.  Fish hang out around creek mouths at low tide waiting to enter the creeks to feed during high tide.  Just after high tide, they exit the marshes and creeks to wait for the next change.

Moonrise and set create a minor peak in fish activity.  When the moon is directly overhead or underfoot is the major time for fish activity.  Underfoot is when it is on the opposite side of the earth.   This is where moon phase fishing calendars come from.  When there is a new moon the impact is at its highest because the sun and moon are moving across the sky together.

SUNRISE AND SET’S IMPACT ON FISHING

After the tide changes the most impact comes from sunrise and set.  Most fish are more active around sunset and sunrise.  Generally, predators adjust to light changes faster than their prey, which gives them a short advantage.

When I talk about whether I mean barometric pressure.  According to Dr. Stephen Baig, an oceanographer at NOAA’s Hurricane Center in Miami a barometer reading of 30.71 is a typical winter reading for a high-pressure, cold-air cell moving out of northern Canada, compared to the typical average annual pressure of 29.7 in Miami.  As a very general rule, approaching weather systems – such as cold and warm fronts, tropical waves and rain – are usually associated with low atmospheric pressure. Conversely, high atmospheric pressure usually arrives after the passage of such a weather system. When high pressure settles over an area, it often means bright days and relatively calm seas.

Inshore species have large air bladders and are very sensitive to pressure changes.  When the pressure starts to drop fish sense it before the front arrives and increased feeding activity prior to the actual pressure drop.  Also, the lower pressure releases oxygen from the water which brings microscopic particles from the bottom which attracts shrimp and small fish to eat and be eaten.  The reduced pressure of a low creates too much pressure inside the fish’s air bladder. Once the low pressure arrives fish are uncomfortable because of the additional pressure in their air bladder and will seek deeper water to increase the pressure on their bodies.  During this time fish typically will limit feeding.  When the pressure rises it may take a day or two for the fish to readjust and resume normal feeding.  So it is both the low pressure and the changing pressure that negatively impact fish behavior.  The range of 29 to 31 is considered normal for air pressure.  As viewed from above the wind circulates clockwise around a high-pressure system and counterclockwise around a low-pressure system.

While I am writing this I have a barometer in front of me during a series of rainstorms coming across Amelia Island.  The pressure for the last 4 days has been over 30 but it began to fall last night and is now 29.62.  A neighbor came in from the Ft Clinch Fishing Pier yesterday afternoon with two black drum and a redfish enough said.

If you have only one day to fish by all means go.  But if you can pick a day, plan your trip around the tides and weather conditions for a more successful trip.