How to Spring Fish on Amelia Island 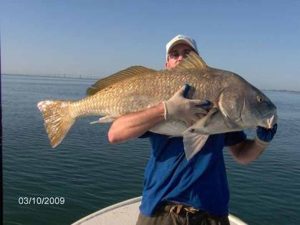 Spring Fishing on Amelia Island is one of the prettiest times of the year.  Temperatures are warming both in the air and the water. Many species that winter in deeper water start their migrations into the bays and creeks around Amelia Island.

Locations around the island that a shore bound fisherman can reach include the St. Marys inlet and rock jetties.  There are redfish, sheepshead, croaker, spotted seatrout, bluefish, tarpon, cobia and sharks in the inlet and near the south jetty. The Fort Clinch fishing Pier is always a good bet for reaching the jetties from shore.  I’ve seen people walk on the jetties at low tide but the danger is pretty high and no fish is worth the risk.  I’ve fished the jetties on the west side of the Fort and been successful with flounder.  People also fish cut bait or shrimp on the east side of the Fort for redfish and sharks.  The current in this area is very strong at times so large sinkers are required.  Fort Clinch charges a state park access fee of $4.

There is a jetty on the Atlantic side of the south end of the island which runs parallel to the beach.  This area is accessed by walking from the Amelia Island State Park parking lot to the left on the beach.  It is about 1 ¼ mile walk so be prepared. These jetties hold seatrout, flounder, blues fish, and redfish.  It is a hike to reach but worth the effort.   If you have a 4-wheel drive you can drive from the Amelia Island State Park on the beach away from the George Crady Bridge to access this jetty.  Be sure to obtain a permit for non-county residents.  Permits are obtained at Flash Foods next to Harris Teeter, the Nassau County Courthouse on Centre Street, Judicial Annex at 76347 Veterans Parkway, Yulee and the gas station just south of The Surf on Fletcher.

Standing with your feet in the surf during spring is excellent for whiting, seatrout, black drum, redfish, and flounder.  There are more than 50 beach access points on Amelia Island, many with parking.  One of the secrets of surf fishing is to locate rip currents.  After water rushes to the beach it must return to the ocean.  This action of the water flowing back into the ocean can be a rip current.  If the backflow is spread out across a large area it goes unnoticed but when it is concentrated in a small area we can see it as a rip current.  There are several things to look for when looking for rip currents. The beaches on Amelia Island typically have a sandbar about 200-300 feet from shore.  When the tide is low it is easy to spot these bars.  When the tide is high the waves break at the bar then progress to shore.  A wave breaks when the bottom becomes too shallow and the wave slows because of friction with the bottom but the top of the wave keeps moving and falls forward.  A gap in the sandbar can be seen because the waves don’t break as soon if there is a deeper spot in the bar.  Where there is a break in the sandbar the water will flow out to sea, that area is a rip current.  Rip currents do not always form on sandbars but there are other signs that indicate a rip current.  Watch the foam that forms when the waves break against the shore.  That form will form a river that you can see moving out.  This indicates a rip current.  Many times rip currents do not go straight out from the shore but move at an angle.  Although swimming safety is always a concern we are talking about fish here.  Fish hang out in rip current waiting for bait to be washed from the shore to them.  Placing your bait on the outside edge of the rip current will increase your chance of catching fish.  One of the best areas for surf fishing is the pier at Amelia by the Sea Condos.  Fresh dead shrimp fished on the bottom is an effective technique.   Work a 3-inch Berkley Gulp shrimp tail in the molten color pattern hooked to a 1/4-oz. led head jig through the rip current will surely attract someone’s attention.  Any lure in the mullet color pattern is also deadly.   For more details goto  Surf Fishing Amelia Island.

Backwater fishing is excellent for redfish in the Amelia River, bays, and tidal estuaries.  Gold spoons like the Johnson Silver Spoon in Gold and in-line spinners work well when the tide is flooding.  Try a 1/4-oz. led head jig rigged with a Berkley Gulp Shrimp in the New Penny pattern during low tide.  A dead shrimp fished on the bottom is always a good way to go.  Redfish are extremely wary of any noises.  Even kayakers must move with caution especially when anchoring or storing paddles.  Seatrout also bite well in the backwaters during a flood tide while floating a live shrimp under a popping cork.  Work live shrimp over flooded oyster bars, creek mouths, and edges of deep drop-offs.

Even though this site is primarily concerned with saltwater fishing I’ll insert a short note on freshwater fishing.  Largemouth bass weighing to 10 pounds are annually caught and released in many local brackish tidal rivers, including Boggy, Thomas, Mills and Lofton Creeks.  Look for the high falling tide to produce the best action while fishing with live shiners, dark-colored plastic trick worms or silver Rapalas.  The lily pad shorelines of Boggy Creek annually produce big bass during the spring and receive very little fishing pressure.