See a Deep Look at Mole Crabs from Vincennes PBS at the bottom of this page.

Sand Fleas on Amelia Island.  Mole Crab or sand crab in some other locations but Emerita talpoida everywhere. 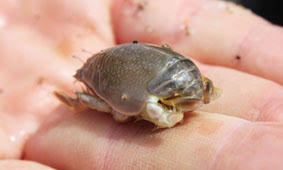 Sand Fleas are not fleas and don’t bite.  They are a small crustation that lives at the water’s edge known as the swash zone during the summer months.  Sand fleas either dig deeper into the sand or move out to a sandbar from late November to Mid- April.  Mid-April corresponded to water temperatures between 67°F and 70°F on Amelia Island.   Sand Fleas prefer finer-grained sand with a gentle beach slop.  The highest concentrations occur during low to moderate waves. 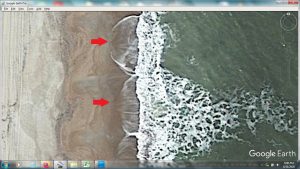 At high tide, sand fleas move up the beach so they are still in the swash zone.  Look in the troughs marked with red arrows between ridges of gravely sand.   The ridge redirects the returning water into the cusps.  This is where the sand fleas feed.  Look for small shorebirds picking at the sand in the swash zone.  These are most likely sandpipers and eating sand fleas.  Just follow their lead and concentrate on the area where the birds are. 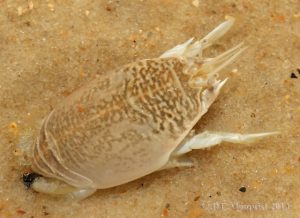 The two antennae are the giveaway

When a wave comes in the sand fleas move out of their burrow and feed.  When the wave recedes back off the beach sand fleas quickly dig back into the soft sand.  You can see vee-shaped ripples when sand fleas burrow back into the sand. This is caused by the two antennae which protrude from the sand slightly.

High waves and or rising tides reduce the population in the surf swash zone. 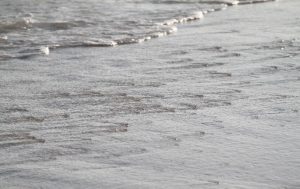 “As the water recedes from a wave, a sand flea can be spotted by its “V” left behind as the water flows back. A large number of sand fleas will resemble more of a lumpy area of sand — this is where one should rake.

Often, area beaches will have a contour of slight rolling high spots and low spots, explained Capt. Bob Pelosi, a Palm City sand flea hunter. As the wave flows back to the sea, sand fleas will gather in the low spots.

There needs to be a little bit of wave action or surf, but too much surf also prevents sand fleas from showing. The sand also cannot be too rocky or “shelly,” Pelosi said.”

Dip into a pot of boiling water for 30 seconds, no more, to blanch.  You can tell when the flea is ready remove because it will float.

Take fleas out and submerge immediately into ice water to stop the cooking process, very important

Can be stored frozen for a year or more.