How to Catch Sea Trout 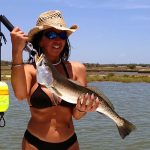 How to Catch Sea Troutt

How to Catch Sea Trout

The spotted seatrout is also known as sea trout, speckled trout, spec, and trout.  It is either the most popular or second most popular inshore species in Northern Florida depending on who you ask.  Trout are unique in that it is the only game species that spends its entire life inshore in northeastern Florida.   Most species leave the inshore locations so there is no need to try to catch them in the offseason.  There are different techniques depending on the season. There are also different techniques for small trout and large trout, also know as gators.    In this area, gators are fish above six pounds.

Trout are drawn to four conditions temperature, structure, salinity, and food.   The salinity in the Amelia Island area remains fairly consistent.   A variable that can lower salinity is rainfall.   The St Marys and Nassau Rivers are the only freshwater sources other than normal runoff.  The jetties at the mouth of the St Marys River has some salinity variation due to tidal changes and rainfall.  The George Crady bridge area also changes salinity based on tide and rainfall due to the Nassau River, fresh water, merging with the Amelia River, salt water, just upstream of the bridge.  The Amelia River and its various creek are all salt water until the Nassau River joins the Amelia River and discharges into the ocean at the Crady Bridge.  Trout do not tolerate freshwater but are OK with less than the salt levels found in the open ocean.  The structure is more constant than the three other factors.  Docks, oyster beds, sandbars, and marshes remain from one year to the next.  Bait moves with the temperature and barometric pressure changes.  Trout eat shrimp and small fish so if is too cold or hot for the prey there will be no trout in the area.   Shrimp borough when it is less than 62 degrees and become unavailable in the colder months.  When the water starts to warm shrimp begin their migration offshore to spawn. Pinfish is another food source for trout.  Pinfish are readily available to trout during most of the year.  Shrimp and pinfish are affected by barometric pressure.  A drop in pressure over more than a few hours will send shrimp higher in the water column while pinfish will move deeper when the pressure drops.  Trout will move deeper with the bait and for comfort.

How to Catch Spotted Sea Trout in Spring

However, trout are found in the surf, ocean inlets, jetties, piers, seawall, oyster beds, sandbars, navigation channels and grass beds primarily based on temperature and food. The ideal temperature range for spotted trout is 68°-78°.  They will tolerate temperatures as low as 48° or as high as 88°.  Salinity change with an incoming or outgoing tide will move trout too. Finding the right combination of salinity and temperature is important because these water conditions dictate where baitfish and shrimp will be.  Baitfish and shrimp are what trout are searching for.  In general, the farther from the ocean, the warmer the water temperature will be during March.  However, when cold conditions inland generate cold run-off fish will move into the various saltwater creeks that do not receive freshwater runoff.   The St Marys River is affected by conditions in southern Georgia because it is 126 miles long. The Nassau River is only 30 to 40 miles long so is only affected by local conditions.

How to Catch Spotted Sea Trout in Summer

The open ocean on average reaches the lower range of the trout’s ideal temperature in mid-April.  By June the water begins to become uncomfortably warm.  When that happens trout begin to seek cooler waters.  They move to deep pools and upstream in the Nassau or St Marys Rivers.  The St Marys River jetties is a great summer spot.  The best bite I experienced was between one and two hours after high tide by the jetties.  I caught 6 keeper trout in 45 minutes.

How to Catch Spotted Sea Trout in Fall

Like spring fall brings cooler temperatures.  But ideal trout temperatures don’t come until October or November.  Look for trout moving back into creeks chasing mullet.  This is the best time of year to catch a large trout.  Use large baits that imitate a mullet or the largest shrimp available.

How to Catch Spotted Sea Trout in Winter

Winter is an interesting time to fish for trout.  Large trout will move into the shallowest water looking for warmth.  Mullet also are looking for warm water in the same locations.  A mullet imitation fished with a twitch-twitch-pause action will draw attention.  Don’t forget that these fish are in very shallow water and are quite nervous.  Use stealth and make long casts.  How to Catch Skittish Fish