Olmstead’s Rescue Comes with Only Minutes to Spare

The U.S. Coast Guard rescue swimmer said only minutes remained before he reached the point of no return. Kevin Olmstead of Fairhope, a veteran angler and fishing guide for more than 20 years, had been in the water in Mississippi Sound for 10 hours after being dumped overboard by a wave as he tried to retrieve a life jacket. 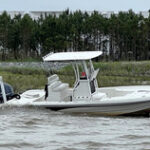 Olmstead was unable to grab the life jacket before he went over the gunwale of his beloved Ranger bay boat, and the outboard, which he thought was in neutral, was still in gear. Olmstead’s tenacity and desire to return to his wife and kids kept him hanging on despite the rough water and effects of hypothermia.

“I told my story because I didn’t want to draw attention to myself,” Olmstead said after numerous media outlets featured his tale of survival. “The story is ‘can I help someone?’ and not have to go through what I went through, because it was hell.”

Olmstead, 53, was wade fishing in the west end of Dauphin Island when he decided the conditions were getting too rough to stay. He got back in his beached boat and started what should have been a bumpy ride back to Fairhope.

“I was there by myself,” he said. “I shouldn’t have been over there in that kind of weather. I’m kicking myself for not making sure my throttle was in neutral before I unhooked my kill switch to put on a life jacket.

“I was in the Sound heading back to West Fowl River to cut off some time. It was getting rough. I eased the throttle back and thought it was in neutral. I unhooked my kill switch from my belt loop and stepped one foot out of the console to reach around and grab my life jacket. At that point, a wave hit the side of the boat and threw me in. As I came up, my head was almost bumping the boat. When I got my wits, I was looking straight at the ladder on the port side. I reached out to try to grab it. I got my index finger on my right hand over the ladder. As the boat pulled me, my finger slipped off.”

With wading boots on, he had no chance to catch the boat that was slowly moving away. He got out of the boots, but he knew he was in deep trouble.

Olmstead pulled his shorts off and tried to tie the ends of the legs to trap some air for flotation. It didn’t work, so he took his long-sleeved fishing shirt off and tied the sleeves to do the same.

“Meanwhile, it’s 3-foot waves out there,” he said. “I’m probably 2 miles from the only rig out there. I can’t see any poles or cans (channel markers) or anything out there. I might have had 3 inches of air in the ends of both of those sleeves, about the size of baseballs. I’m 135 pounds soaking wet. I held both sleeves against myself. I tested it with treading with my legs. I didn’t have to tread as hard to stay up.

“One of the hardest things was I was taking 3-foot waves over my head every two to three seconds. I was drinking a lot of saltwater, and I would have to hold my breath. The waves were trying to drown me.”

The tide was coming in at the time, but the waves were rolling in from the north, counteracting the effects of the tide.

“An hour went by, and I made it,” Olmstead said. “Then three hours went by, and I thought, ‘I’m still here.’ I had to be my own drill sergeant that day. I had to pump myself up. I had to clear my mind of any negative thoughts. Negativity wasn’t going to help me survive. And I talked to my kids and my wife, like we were sitting on the couch; anything I could do to keep myself calm as possible.”

About 3 p.m., Olmstead started feeling the effects of hypothermia, including convulsions and cramps.

With the rough conditions, he never saw another boater in the area, but he managed to get close to one of the pilings near the rig. With the tide turning, Olmstead knew he had one shot at getting to the piling before he was swept into the Gulf.

“I knew I had to get to something stationary to have a chance for someone to see me,” he said. “It was 100 yards away, but it seemed like a mile. I swam and swam one-handed because I was still holding onto those little bitty bubbles. It was getting dark, but I told myself that I’ve got to get there. When I got to a point to where it was 10 yards, that was about the time I was about ready to give up the whole day. That was probably 7.”

Somehow, Olmstead managed to reach the barnacle-encrusted piling and got on the up-current side and gripped the piling as lightly as he could with his feet and palms of his hands to keep from getting cut from the razor-sharp shells.

“I was tickled pink to be on that piling, and I wasn’t getting off of it,” he said. “I started seeing a little more boat action. I had seen the Coast Guard jet fly over before I got to the piling, and I knew it had to be for me. Then I saw a boat that looked like it was coming from the rig, and they were going parallel to me. When they got even with me, I thought they were going to keep going. I said, ‘Oh, God, please, please.’ I couldn’t wave because I was afraid I would fall off the piling.

“I saw them turn and come toward me. It was my buddies Rick Tourne and Kyle Mitternight. Kyle was jumping up and down on the front of the boat when he saw me. That was a wonderful feeling.”

Olmstead later learned an armada of local boats was searching for him. Tourne’s strategy was to go to every piece of structure in the Sound that Olmstead could possibly cling to from Dauphin Island Bridge to the west side of the Sound.

“Rick asked Kyle if he could see that last piling,” Olmstead said. “Kyle said no, but Rick said they weren’t going to leave anything unturned. They came over, and I was elated. They got me in the boat, and the Marine Police came along not long after that.”

After Olmstead reluctantly was transferred to the Marine Police boat, a Coast Guard helicopter showed up and dropped a rescue swimmer into the water. The rescue swimmer deemed it too risky to try to lift Olmstead into the helicopter, and he was transported by boat to Bayou La Batre, where he was taken to The University of South Alabama (USA) Hospital via Life-Flight helicopter.

“The rescue swimmer said I had about 20 more minutes and I was going to be gone,” Olmstead said. “He said he wasn’t going to sugarcoat it for me, and he said he knew professionals who couldn’t have done what I just did for 10 hours. He said it was crunch time.”

Fortunately, Olmstead’s boat eventually washed up on the rock jetties at the State Docks in Bayou La Batre. Had the boat gone into the marsh or Gulf, nobody would have known at the time that something was amiss. When the boat was found in gear with the kill switch in place and the outboard running, they knew Olmstead was somewhere in the Sound and the intense search began.

“There are two things about this that are important. My wife and kids got me through this,” Olmstead said. “Something gave me the strength to make it through, and it was them. I didn’t want to leave them that way.

“Second, and most important, is the life jacket. You think it’s not going to happen to you. I’ve been on the water for more than 30 years. I’m the safest boater that I know. It can happen to you. I’m living proof. Don’t be a hardhead. I survived. I’ve got a great story, but the story is can I help somebody else to not be in that position. That’s the most important thing.”

Olmstead’s story of survival has already prompted action from boaters and anglers he didn’t even know. He’s received messages of support and copies of receipts showing the purchase of life jackets because of his ordeal.

“The effort of all my buddies – I can’t thank them enough,” he said. “I love all those guys. They are my heroes. I survived because I had to. I had to get home to my wife and kids. Those guys went out of their way to rescue me, and I’m forever grateful.

“But I don’t want anybody else to go through this experience. I hope this will draw attention to how important it is to wear a life jacket.”